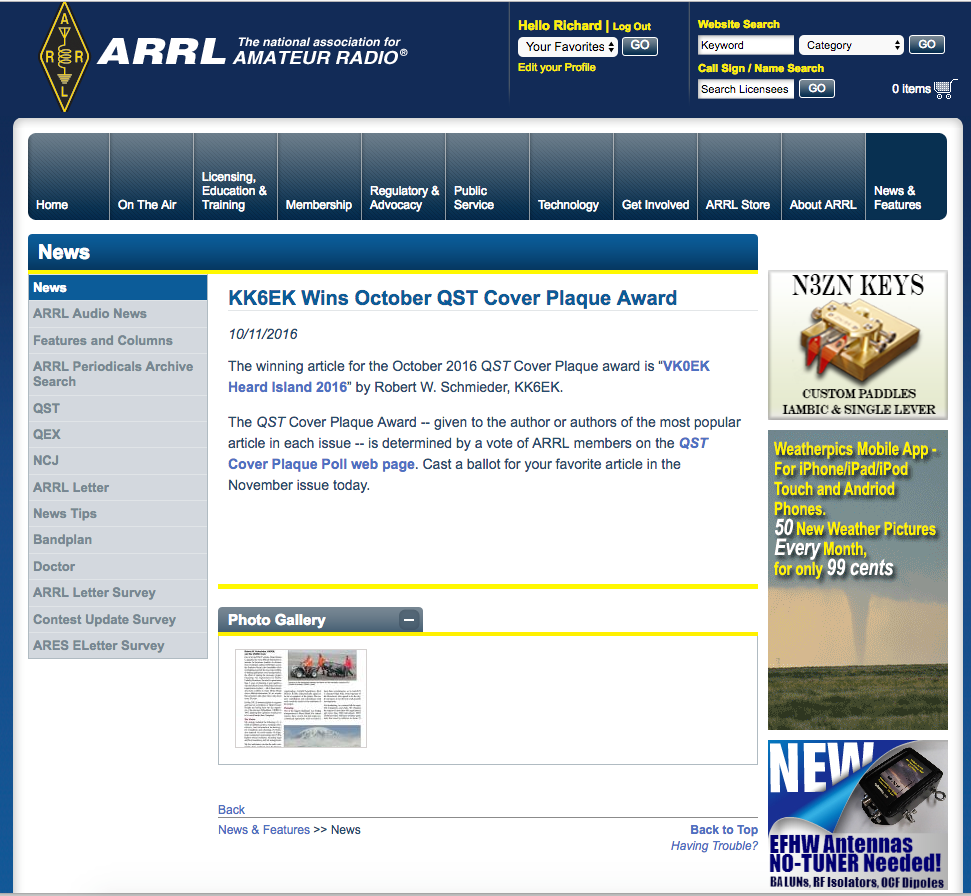 Hearty congrats to Bob, KK6EK and the entire VK0EK team for a prestigious prize of winning the October 2016 QST Cover Plaque Award.

We are so very proud and thankful for this cover and very well written article by Leader Bob, KK6EK. Please consider voting for it for the October 2016 QST Cover Award: 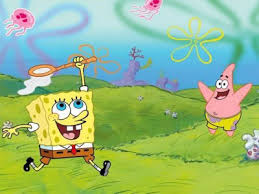 As promised, once we received the laptops back from Heard Island, we would reconcile all laptops with the master N1MM+ log, and more than 100 QSO’s have been recovered. We hope you were the lucky one – and if you have any questions – please contact our QSL Manager, Tim, M0URX:

We would like to thank Pete, W6OP, and Mike, KJ4Z for their most excellent efforts finding and recovering these QSO’s. The majority were recovered from a failed laptop that did not sync with the N1MM+ Master log.

Recovered QSOs have been uploaded to OQRS http://www.m0urx.com/oqrs/logsearch.php

They will be uploaded to Clublog and LOTW very soon. 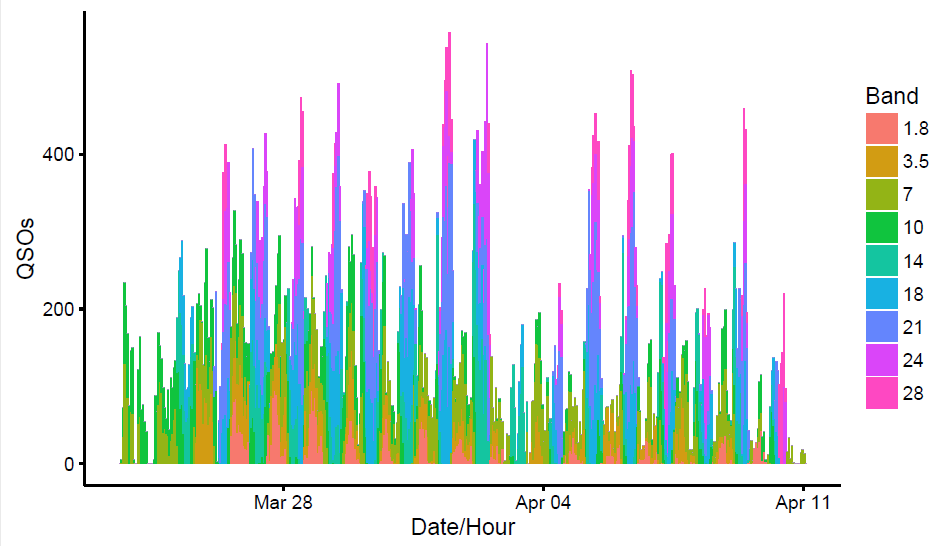 Contacts by day and hour (UTC), colored by band. Can you spot the geomagnetic storm?

In the data, it is clear that the there was a strong diurnal cycle to propagation, and a sharp decline in the maximum usable frequency in the late afternoon local (around 1300 UTC). Additionally, the effects of the geomagnetic storm can be seen in the hour-by-hour time series shown above, where on April 3rd and 4th, the high rates typical of other afternoons did not materialize.

Bill, AE0EE, has created a video which encompasses the voyage of the Braveheart from Cape Town through the landing on Heard Island. In it, not only is there the rolling of the sea, but the deployment of two types of scientific buoys. First up is an ARGO diving buoy, followed by a NOAA drift buoy. The birds seen as the ship arrives at Atlas Cove are the endemic Heard Island cormorants. Upon reaching the island, our team was greeted by king penguins. 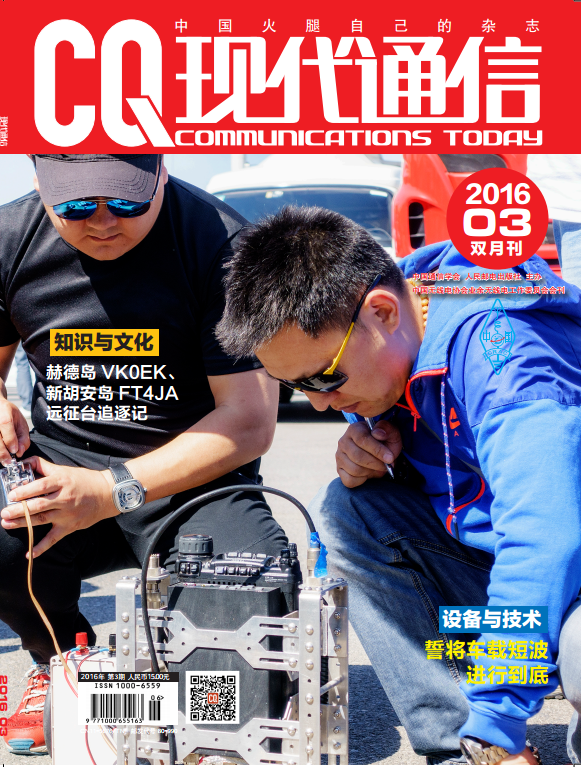 You might remember Ruan was featured during the DX-pedition as making a QRP QSO using his portable station. He sent the full article that features Hans-Peter HB9BXE, featuring both Hans-Peters many DX-peditions and his excellent operating skill as well as details regarding the 30M Four Square that Hans – Peter and a friend he worked with regarding its technical design. Here we have Hans – Peter on Heard Island and other DX-peditions . . .

Here are some of the 30M Four Square technical details, and finally . . . 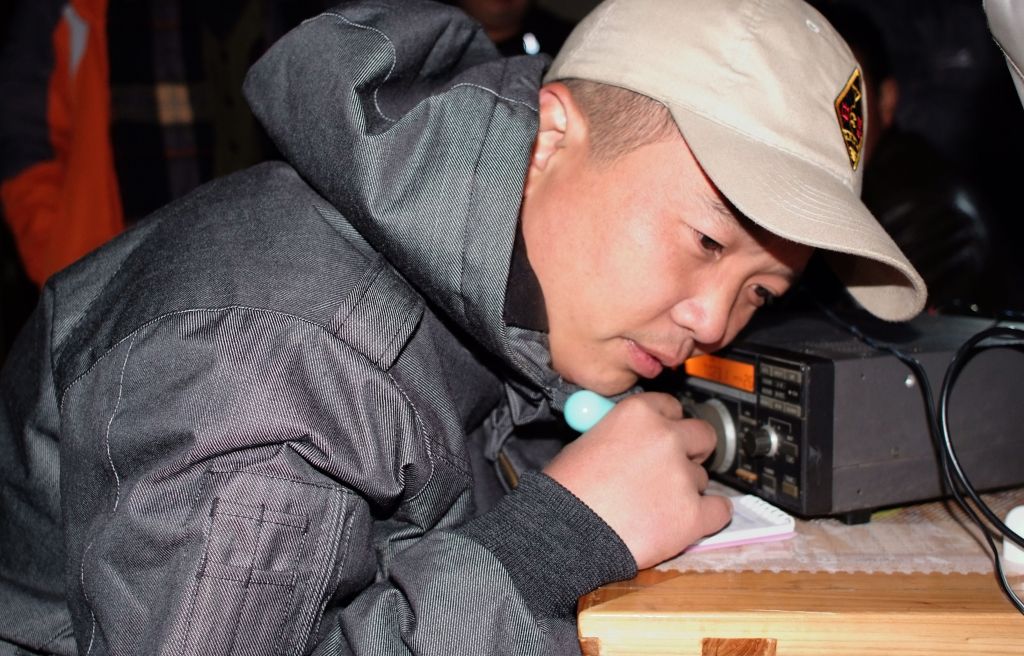 Thanks very much Ruan – we really appreciate it!

Please enjoy this excellent video made by Vadym, UT6UD who was one of the “dynamic duo” on Top Band (along with Dave, K3EL), and a major reason why VK0EK broke Top Band records from Heard Island: 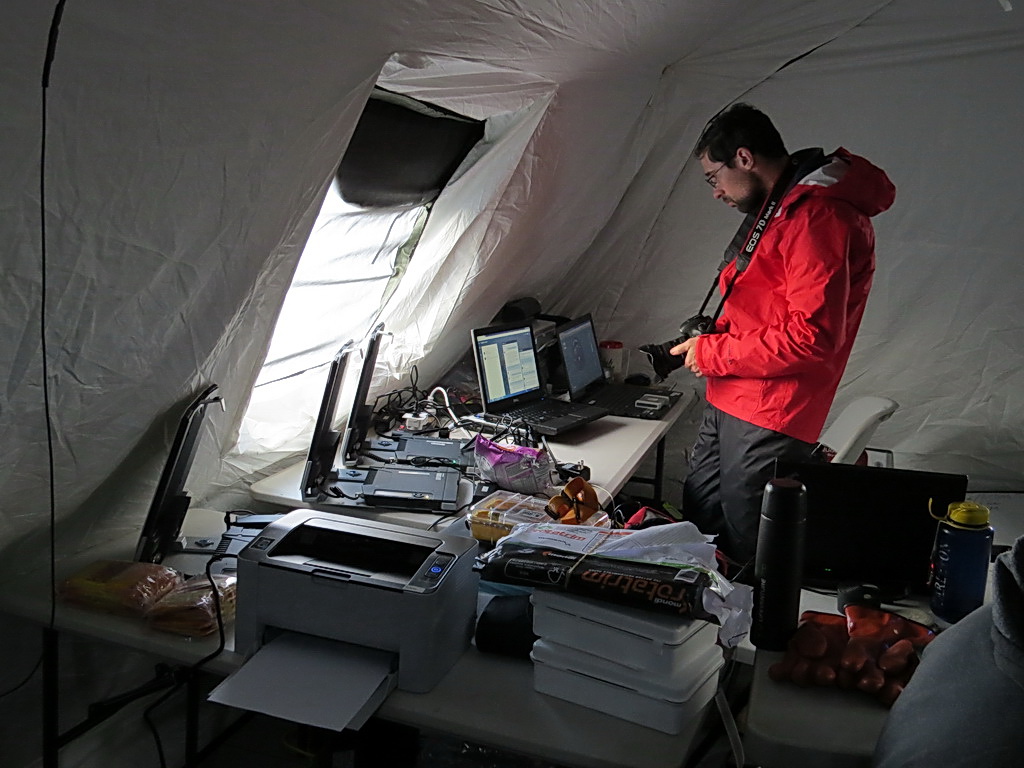 Heard Island team member Bill MItchell tends the satellite link to the internet, enabled by Inmarsat BGAN 710 terminals, seen at his left. One terminal was dedicated to the radio operations, providing real-time online updates of the radio log. The other terminals were used for administration and personal communications. The terminal speed was sufficient to enable several first-time innovations, including Skype calls and remote radio operation.

Inmarsat Government, a leading provider of secure, global, mission-critical telecommunications to the U.S. government, today announced that it has successfully supported the 2016 Heard Island Project, a multidisciplinary expedition to a remote island in the Southern Ocean.

The purpose of this three-week expedition, undertaken by Cordell Expeditions, a nonprofit research organization based in northern California, is to provide new information about Heard Island’s harsh volcanic environment and to validate satellite communications in severe, and extremely isolated, environments in the Antarctic.

The Heard Island Project’s goal is to bring technology to challenges of worldwide need and interest. The results from this expedition will help scientists better understand the effects of climate change in polar regions and the ability of models to predict the consequences of actions or inactions in facing this challenge.

Other areas of focus included: searching for unknown species that may have been revealed by recent major glacial retreat; confirming the group’s recent discovery of subterranean rivers carrying glacial meltwater; documenting plastic debris from sources worldwide; and collecting samples of the environment that are expected to contain cryptobiota – organisms that have the ability to suspend metabolism for years or decades in the face of extreme conditions of cold, heat, desiccation or toxic chemicals.

Inmarsat’s BGAN service played a key role in the expedition’s radio science (medium frequency (MF) and higher frequency (HF) propagation experiments) as they contacted over 75,000 other stations during unusual solar geomagnetic conditions. It also enabled reliable communications with the science teams when they travelled to a number of areas remote from the base camp to gather samples (that will go to universities for analysis of lava content, biota, glacier stream chemical composition and more) and conduct high resolution (“Gigapan”) photography of the many unusual features here. “Inmarsat Government’s support helped advance the use of satellite communications from this extreme, isolated, environment in the sub-Antarctic region. The availability and reliability of Inmarsat’s satellite communication services enabled a qualitatively better capability for the expedition to communicate its activities to the general public, ensure safety, and provide for real-time interactive scientific collaboration,” said Kenneth Karr, Heard Island Expedition. “In particular, it helped facilitate conferencing for scientific collaboration and emergency response, and the ability to upload archival images and data in the most challenging weather conditions that included high winds, driving snow, sleet and volcanic grit that blows with the wind – at times reaching 80 mph.”

The group carried out a major amateur radio operation using the call sign VKØEK. Unlike any other similar amateur radio operation, the Cordell Expeditions group developed a unique technology that enables near real-time internet display of the radio operations. The system, called DXA, uploads the radio log data through Inmarsat satellites to an internet server once per minute, providing viewers with an almost real-time graphical interface to the expedition. DXA was first deployed on an expedition to Kure Atoll in the Pacific in 2005 and then on a second expedition to Clipperton Island in 2013, On both of those expeditions, the DXA website received 40 million hits, attesting to its popularity and the value of real-time data from the expedition. The latest version (DXA3) was deployed on Heard Island; it can be seen on line now at http://dxa.vk0ek.org.

“Supporting this expedition further demonstrates that Inmarsat’s services are best-in-class when it comes to delivering dependable ‘on-the-move’ communications – in any location or weather condition,” said Gabe Venturi, Chief Commercial Officer, Inmarsat Government. “No matter where they are on the map, users seek highly available connectivity for reliable access to the information and services essential for mission success. It has been a privilege to support the Heard Island Expedition and do our part in further advancing scientific exploration.”

Inmarsat Government is a leading provider of secure, reliable and affordable mission-critical telecommunications to U.S. military, intelligence and civilian organizations. Equipped with the industry’s leading satellite and terrestrial infrastructure, it delivers custom, end-to-end networks and solutions that can sustain communications anytime, anywhere. Inmarsat Government, a wholly-owned subsidiary of Inmarsat plc, and an authorized Value Added Reseller (VAR) for Inmarsat Global Xpress, is responsible for Inmarsat’s retail U.S. government business. It is headquartered in Reston, VA, with network assets and operations around the globe.

Inmarsat plc is the leading provider of global mobile satellite communications services. Since 1979, Inmarsat has been providing reliable voice and high-speed data communications to governments, enterprises and other organizations, with a range of services that can be used on land, at sea or in the air. Inmarsat employs around 1,600 staff in more than 60 locations around the world, with a presence in the major ports and centers of commerce on every continent. Inmarsat is listed on the London Stock Exchange (LSE:ISAT.L). For more information, please visit www.inmarsat.com. The Inmarsat press release newsfeed and corporate updates are on Twitter @InmarsatGlobal.
“No matter where they are on the map, users seek highly available connectivity for reliable access to the information and services essential for mission success. It has been a privilege to support the Heard Island Expedition and do our part in further advancing scientific exploration.” 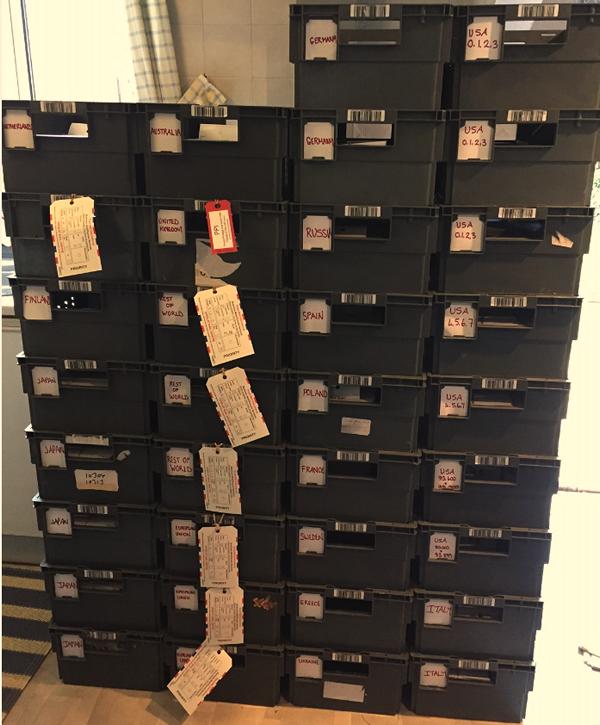 Tim, M0URX reports that all of the QSL cards for requests received so far are in the mail:

Tim completed the processing of these QSL’s in record time, and Mike, KJ4Z provided all labels like a pro. 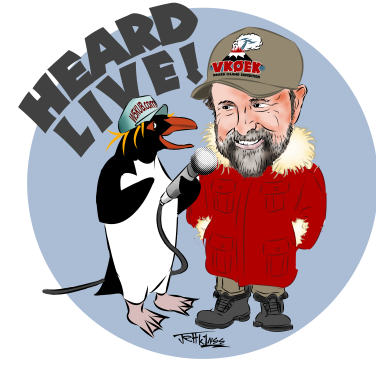 Our live Amateur Radio Roundtable show Tuesday May 31 will feature Dr. Robert Schmieder, KK6EK, the leader of the Heard Island DXpedition. Tune in to hear everything from the travel, terrible wx with winds up to 70 MPH, propagation, contacts, the team, scientific experiments, and much much more. Phone lines will be open as well as the chat room. Watch onW5KUB.COM at 8:00 PMCT or (o200 UTC Wed) This show is also simulcast on international shortwave radio station WBCQ on 5130 Khz.